Keith Sonnier first exhibited with Castelli at the landmark inaugural show at Castelli Warehouse in 1968, entitled 9 at Castelli. At this point Sonnier had already begun to make use of ephemeral materials in the creation of his work. His first solo show at the Warehouse followed in 1970, in which he continued his investigations into psychologically loaded materials in an environment infused with ultraviolet light. In sculptural works such as Ba-O-Ba Fluorescent he used foam and rubber; and in Ju-Ju he employs cheesecloth and a tuxedo.

The 2015 exhibition investigates how the perception of the work from the 1970 solo show has changed some 45 years later. Of that time Sonnier says, “We made art that was defined by its defiance of the traditional idea of what could be considered art.” Sonnier not only challenged the use of conventional materials and traditional presentations but also, through his use of light and color in a dark environment, created work that exists differently each time it is installed. In the 1970 show video was used not only to add a “fourth dimension” to the work but also to freeze each experience in time.

Sonnier returns to Castelli Gallery in 2015 with an ultraviolet light show that will not duplicate the 1970 show but will offer an original experience that remains true to his original concepts. He eventually stopped making films in 1974, but, since their production is central to the work of this period, the current exhibition will have on display a complete projection of all of his films.

The exhibition is accompanied by an illustrated catalogue featuring an interview with the artist, which examines the issue of how work of this nature is being preserved and reinstalled 45 years later.

Keith Sonnier was born in Mamou, Louisiana, in 1941. He has a BFA from the University of Southwestern Louisiana and a MFA from Rutgers University. He is the recipient of numerous awards, including the Guggenheim Fellowship. His work is included in the collection of many museums in the US and Europe, including the Museum of Modern Art and the Tate Modern. He lives and works in New York. 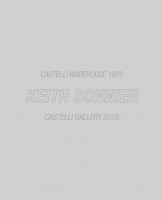