“The language of feelings is conservative, even when the feeling is not” – Robert Musil

Leo Castelli Gallery is pleased to announce the exhibition Joseph Kosuth: Freud, Wittgenstein and Musil running from September 12 – October 27, 2012. The exhibition will feature the iconic ‘Zero & Not’ installation that was first exhibited at Leo Castelli Gallery’s historic Greene Street location in 1986. Also on view will be two additional works: ‘Number 182 (I/u + V/i),’ 1989, from the artist’s Wittgenstein series; and ‘R.M. #1,’ 1992 from his Musil series.

‘Zero & Not’ is a wall-paper installation, the text utilized is a paragraph from The Psychopathology of Everyday Life by Sigmund Freud. In the words of the artist, “The use of Freud’s work, in this context, is contingent on understanding its use by the ‘author’ of Zero & Not ... as a kind of conceptual ‘architecture’. The work, ...”begins with a counting off of the paragraphs, repeated until the walls are full; and that cancellation which constructs as it erases, suggesting ‘one thing’ (a field of language itself) present, while removed.”

The neon work, ‘Number 182 (I/u + V/i),’ 1989, relates to Wittgenstein’s philosophy of language as well as his investigation of aspects of language pertaining to value, ethics and meaning of life. ‘R.M. #1,’ 1992 is part of a dialogue around the relationship of art and language with its viewer/reader.

Joseph Kosuth was born in 1945 in Toledo, Ohio. In 1969 he had his first solo exhibition at Leo Castelli Gallery, New York. He lives and works in New York and London.

The exhibition will be accompanied by a fully illustrated catalog with three texts by the artist. 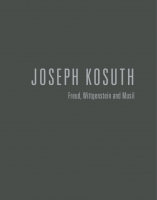 Joseph Kosuth
Freud Wittgenstein and Musil 2012
Back To Top