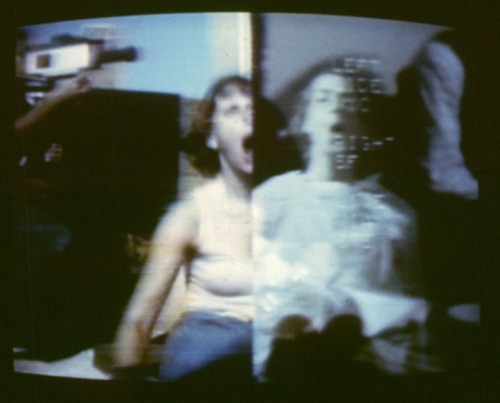 Remembering Keith Sonnier, who would have turned 79 today: on the Castelli Blog we are hosting Liza Béar's reflection on her collaboration with Keith. For additional information about the project, we invite you to visit her blog, Send Receive Satellite Network 1977.

Long before the widespread use of the internet, the mid to late seventies saw a burgeoning telecommunications revolution, which excited some of us more than the counter-cultural thrust of, say, Punk and the Sex Pistols. As independent artists/filmmakers, we wanted to be active participants in it, not just passive recipients of broadcast information produced by others.

In the present era of unavoidable, ubiquitous Zoom teleconferencing, it may be hard to imagine the frisson evoked by the satellite itself and the prospect of instant two-way communication across 3000 miles--or the sheer bureaucratic offensive needed to get access to it.

Always well-informed and eager to explore the cutting-edge, in 1975, prior to the launch of CTS, the newest NASA satellite, Keith Sonnier had submitted a preliminary request to NASA to do an interactive transmission between East and West Coast artists. In NASA terms, this would be a "demonstration" of a few days' duration.

Jointly owned with the government of Canada, which had it designed and built, the CTS, a high-powered experimental communications satellite, was intended for the public and paid for by taxpayer dollars. CTS (Hermes) operated at frequencies of 12-14 GhZ, higher than previous satellites. With its amazing 200- watt transmitter, the most powerful of its time, it could be accessed by low- powered and relatively inexpensive satellite dishes within its footprint. That characteristic made it ideally suited for use by non-profits and community organizations. But perhaps NASA didn't expect individual applicants.

Launched from Cape Canaveral in January 1976 at a fixed orbit 22,300 miles from earth, CTS, nicknamed "the bird" for its unusually large winglike solar panels, had a life expectancy of a few years.

Initially Keith had conceived of this project as "a work", in the style of his previous New York-LA Hook-Up, which linked an audience at 112 Greene Street, New York, with the Grinstein residence in Brentwood, LA, by amplified telephone.

By the summer of 1976, not having received a NASA response to his proposal, Keith asked me to co-produce this project with him. (Avalanche 13 had just gone to press; I'd been doing radio programs and early videos since '75.) Dialogue was the essence of our long-standing friendship and working relationship. Also, Center for New Art Activities (CNAA), the 501(c)3 that published Avalanche, could be used to file a new proposal. A not-for-profit was an essential step in the acronym supply chain.

Some months later, we traveled to Washington DC to attend satellite workshops and learn the NASA lingo. I'm glad to say we treated this serious matter with a sense of humor--lots of laughter at the required paperwork, literally-- and the linguistic demands placed on us. A learning curve indeed. Instrumental in these efforts to woo NASA was Andy Horowitz of the Public Interest Satellite Association (PISA), a major source of information and support. Horowitz actively participated in both Phase 1: Send/Receive and Phase 11: Send/Receive.

In the course of our collaboration, Keith's initial concept changed. NASA asks you to state a need for the demonstration. What would be our objectives? We got to see it as a telecommunications experiment, a prelude to setting up a satellite/cable network, coordinated by and for artists who weren't under an institutional umbrella. The evolution of the project took on a political, or at least an activist dimension.

As part of the preparations, and to introduce potential participants to the subject, in the Spring of 1977 on our return from DC, we made Phase I: Send/Receive, a 23 minute 3/4 inch color videotape. For the record, Sony 3/4 inch color portapaks--which we needed to shoot in Keith's studio--were brand new then. We had to borrow one from WXXI-TV in Rochester.

The format of Phase 1 relates more to Keith's earlier videos than to documentary. No live action or talking heads; the sound and image are treated separately. A continuously panning camera reveals printed satellite iconography at close range. In a live edit situation, the initial taping was overlaid (by me) with character-generated text--a very basic kind in the 70s--which comments on the imagery presented to the camera. (I'd started using live texts in my own tapes in 1975).

While the first of three visual sets compares the satellite industry to television in the mid-thirties, the second focuses on the shifting balance of power between government and industry and the limits of citizen access, and the third points to implications of satellite technology for human communication.

The sound mix of Phase 1 includes readings and dialogues about technical, economic and political issues in satellite use as well as meditative background music by Brian Eno. Yes, the dialogues overlap or are cut off, to the chagrin of some, but that was a deliberate part of the editing, intending to evoke the effect of information overload created by parallel channels. You catch what you can.

What are the implications of simultaneity? Of instant exposure and instant response? We couldn't imagine, in 1977, how satellite technology would develop over the next four decades--or who would benefit.

As well as persuading NASA to schedule CTS time for our demo, and to provide a portable earth station (a sort of bread truck with a dish), we had to persuade AT&T to install a special phone line on the Battery Park City landfill, the New York site, then still an ideal open space bordering the Hudson with no buildings but within sight of the World Trade Center. A phone line would be necessary for engineers to communicate during set-up while tweaking antenna placement and noise-to-signal ratio. A seemingly unending stream of clearances had to be obtained from other local authorities.

We also traveled to San Francisco to enlist Brad Gibbs, the head of Ames Research Center, a permanent earth station, in the project, and to meet artists who would participate from there. These were dancer Margaret Fisher, artists Terry Fox, Richard Lowenberg and Alan Scarritt, as well as Carl Loeffler of La Mamelle and video artist Sharon Grace, who became the West Coast coordinator.

Getting Brad on board was the clincher. NASA eventually scheduled satellite time for Send/Receive during three days in September.

Here's what happened: on September 8th, test day, the transmitter in the Class 1 truck broke down. New parts had to be shipped in from Chicago.

On September 10th, which would have been the first transmission day, one satellite channel overheated.

Finally, on September 11, everything worked. The transmission was relayed to public access cable channels at both ends, ours via infra red link to Manhattan Cable.

In contrast to the arduous pre-production run-up and prior technical hassles, the demo itself was remarkably laid back despite an awareness of the scale of the endeavor and the fact that this was a first for the art community. The participants, friends or co-workers*, had been recruited informally. In New York, the bright, late afternoon sunshine reflected off the water no doubt helped the atmosphere, though it made it a bit harder to decipher the screen image.

From the three and half hours of footage recorded on the Battery Park City landfill, we edited Phase 11: Send/Receive, a 3/4 inch half-hour tape.

(Here is a link to view a 2 minute video clip from the demo.)

Looking at the tape, you feel the suspense of waiting for a connection--for the first live feed from San Francisco and, a bit later, anticipating the split screen that would show dancers Margaret Fisher and Nancy Lewis, echoing each others' moves side by side on the screen, a highlight of the afternoon.

Before and after the performances, which included a sound loop by Alan Scarritt, everyone got a chance to interact on camera, discuss aspects of the demo and quiz Brad Gibbs, the NASA rep., about future prospects for public satellite access (not encouraging financially). We got accustomed to the half-second delay, the time it takes for the signal to bounce off the satellite.

Improvising a welcome ethereal soundtrack to the surreal ambiance on set were Richard "Dickie" Landry and Richard Peck on saxophone in New York, and Terry Fox on a "box with two strings" in San Francisco.